Research that matters: How to co-design research and co-produce knowledge for scientific and societal impact. Michael Stauffacher 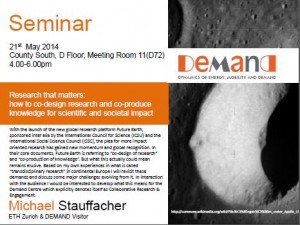 Michael took us through some of the fundamentals of adding words to the beginning of disciplinary – multi, inter, trans – in order to then consider the ways in which forms of transdisciplinarity (meaning extending beyond disciplines to work with others outside of academia) and co-production of research can be achieved. Drawing on his experience of being involved in leading large-scale situated projects, in which a group of researchers and postgraduates students from different disciplines worked together with a specific problem focus that mattered for a particular area, he considered the benefits and challenges of embedding non-academic stakeholders in a co-design research process. His advice included that the pre-phase needs lots of time; roles and mutual expectations need to be very clear and as explicit as possible in part to avoid overburdening of researchers; that co-production is not static but dynamic evolving over time and going through different phases; and that different platforms and spaces need to be used to make exchanges lively and suitable for different contexts and audiences.   In the discussion following his talk, the relevance of aspects of his experience and advice could be seen for the DEMAND Centre programme and our aspirations to have effective non-academic engagement; but the differences were also apparent, particularly that we were having to build demand for DEMAND, rather than collaborate on existing jointly understood problems.

With the launch of the new global research platform Future Earth (http://www.futureearth.info/), sponsored inter alia by the International Council for Science (ICSU) and the International Social Science Council (ISSC), the plea for more impact oriented research has gained new momentum and global recognition. In their core documents, Future Earth is referring to “co-design of research” and “co-production of knowledge”. But what this actually could mean remains elusive. Based on my own experiences in what is called “transdisciplinary research” (http://www.transdisciplinarity.ch/e/Transdisciplinarity/) in continental Europe I will revisit these demands and discuss some major challenges evolving from it. In interaction with the audience I would be interested to develop what this means for the Demand Centre which explicitly denotes itself as Collaborative Research & Engagement.