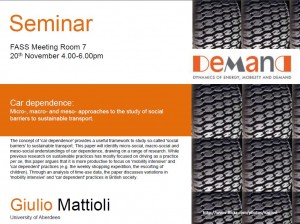 Giulio set out what might be thought of as an ‘anatomy’ of car dependence, distinguishing between representations of car dependence as a characteristic of people, places or practices. He went into detail, thinking about the forms of disadvantage that might be involved, depending on the specific interaction between people and places (who has a car, how much does having a car matter, where and when; sometimes people have a car but at huge cost to the household etc.), and then looking at methods of capturing the relation between practices and car-reliance. Does it make sense to think about car-dependent practices or is it more useful to think of car-dependence as something that has to do with making links between different practices as these are situated in space and time? More historically, when and where did car-dependence first ‘occur’?

Abstract:  The notion of ‘car dependence’ provides a useful framework to study of so-called ‘social barriers’ to sustainable transport. While the concept is used in variety of contrasting ways in the literature, there are arguably only three different understandings of car dependence. The micro-social understanding sees ‘dependence’ as an attribute of individuals and is concerned first and foremost with questions of agency. This makes it akin to what Shove has critically defined as the ABC (attitude, behaviour and choice) paradigm of climate change policy. The macro-social understanding sees dependence as an attribute of (local) societies, and is thus concerned with the structural drivers of increasing car ownership and use. In this context, the relationship between the built environment and travel demand has received considerable attention. Also, researchers have shown that increasing car dependence is a self-reinforcing and path dependent process, which is very difficult to reverse. The meso-social approach to car dependence is arguably the least developed, but also the most interesting for the DEMAND Research Centre. It sees dependence as an attribute of trips – or rather of the activities that people need to travel to. This resonates with theories of social practice, aiming to shift the focus of attention away from individuals and toward practices, without prioritizing either agency or structure. While previous research on sustainable practices has mostly focused on driving as a practice per se, I argue that it is more productive to focus on ‘mobility intensive’ and ‘car dependent’ practices. The latter can be defined as practices where the car has become an essential element in the integration between materials, competences and meanings (e.g. the weekly shopping expedition, the escorting of children). In the presentation, the macro- and micro- approaches will be illustrated with findings from previous research projects. With regard to the meso-approach, I will argue that semi-automated activity pattern extraction techniques applied to the analysis of time-use data have the potential of revealing variations in ‘mobility intensive’ and ‘car dependent’ practices in British society. This contributes to Research Theme 1 of the DEMAND Centre.

This entry was posted in Seminars and tagged cars, mobility, presentation. Bookmark the permalink.