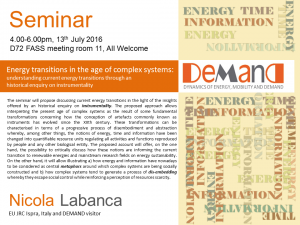 The seminar will propose discussing current energy transitions in the light of the insights offered by an historical enquiry on instrumentality. The proposed approach allows interpreting the present age of complex systems as the result of some fundamental transformations concerning how the conception of human artefacts commonly known as instruments has evolved since the XIIth century. These transformations can be characterised in terms of a progressive process of disembodiment and abstraction whereby, among other things, the notions of energy, time and information have been changed into quantifiable resource units regulating all activities and functions reproduced by people and any other biological entity. The proposed account will offer, on the one hand, the possibility to critically discuss how these notions are informing the current transition to renewable energies and mainstream research fields on energy sustainability. On the other hand, it will allow illustrating a) how energy and information have nowadays to be considered as central metaphors around which complex systems are being socially constructed and b) how complex systems tend to generate a process of dis-embedding whereby they escape social control while reinforcing a perception of resources scarcity.

Nicola, who is visiting DEMAND from the JRC at ISPRA  started by introducing us to 12th century terminology and language – which did not enable distinctions to be made between artefacts and bodies. He then took us through successive moments  in scientific thought and noticing how units and categories change the landscape of what is ‘seen’ and understood, up to the point at which ‘energy’ appears as a meaningful concept. He went on to consider more complex notions of ‘information’ which imply that objects enable many functions, and which arguably act as a ‘shield’ separating people from the environment.   Information, along with abstractions including time, money, matter, resources and energy figure as metaphors which are repeatedly taken literally.

This results in some conundrums in which – following Illich’s ideas – instruments and associated metaphors become systemically counter-productive, preventing realisation of the ends around which they were designed.  For example, means of mobility (cars) when multiplied prevent mobility.  Similarly, the pursuit of energy efficiency in the name of demand reduction, can increase demand. More than that, complex systems have the paradoxical effect of generating ‘standardised’ units and terms that reinforce a perception of resources scarcity   By implication, the realm of science, engineering and policy reproduce and may operate within paradigms which are correspondingly counter- productive. One way out of this – as proposed – is for people (lots of people, not just scientists, engineers and policy people) to provide for themselves and to, at least temporarily, ‘exit’ the metaphors, and in practical terms to re-make links between production and consumption, not in generic terms but in ways that are adapted to specific situations.

This generated a fair bit of discussion for instance about the interdependence, or not, of ideas about need and provision on the one hand and the technologies and instruments involved in ‘meeting’ those needs on the other.  Letting ‘people decide what they need’ occurs in a specific historical context, and in a world in which some ways of living are already well established.  At the same time, Nicola’s talk provided a good account of how issues of demand are squeezed out of normal energy-related discourse.

Whilst in DEMAND, Nicola is working on a book which explores these and other ideas in more detail.