Beyond The Fire Age. Walt Patterson 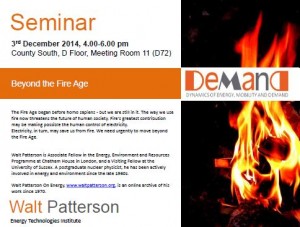 Walt Patterson talked about his forthcoming book, some ideas from which are available here: http://www.waltpatterson.org/beyondfire.pdf

He began by distinguishing between forms of energy production that do, or do not involve fire – and which do or do not involve the consumption/burning of resources like wood, coal, oil etc, and all the problems and emissions that ensue.  This related to a second key distinction – that is the distinction between the parts of an energy system (and costs) that relate to the using up of commodities/fuels, and those parts (and costs) which relate to infrastructure (and which are not used up in the same way).  For example producing renewable energy via a wind turbine involves the cost of the turbine, but the ‘fuel’ – the wind itself – is free and is not ‘burned’ or consumed in the process.  Electricity can be made without fire.

Further distinctions – for instance in how energy is paid for, or perhaps better, what is paid for when paying for energy pointed to a more complex set of questions about the relation between resources and services.  Taking a broad view of ‘infrastructure’ and including clothing and walls, buildings etc. in this category provides an important reminder of the extent to which durable systems/infrastructures organise flows of temperature in particular.  In short there is an energy system ‘beyond’ fire, and beyond the consumption of world fuels.

In policy and in practice, attention is fixed on the fuel aspect: hence International Energy Agency figures which equate energy with fuel types (coal, wood, gas, etc.).  These methods and metrics result in a highly skewed and partial view of ‘energy’.  Potential future transitions for instance towards more decentralised renewable systems promise to bring the non-fuel, non-fire features back into view.  (maybe).  For DEMAND, this talk raised some intriguing questions about the relation between forms of supply (fire based, not fire based) and demand.  Walt’s extended notion of infrastructure also crosses over with some ideas we’ve been considering about where and how demand is ‘made’ alongside and in relation to supply.