The Mobility of the “Uber” Generation: Investigating Individual Attitudes, Lifestyles, Residential Location and Adoption of Shared Mobility of Millennials in California. Giovanni Circella 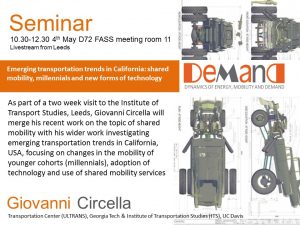 Passenger travel is going through a time of great transformation in the United States as well as in other countries. Young adults (“millennials”), in particular, are reported to behave (and travel) differently from previous generations at the same stage in life: they postpone the time they obtain a driver’s license, often choose to live in urban locations and not to own a car, drive less even if they own one, and use alternative means of transportation more often. However, the reasons behind these trends, and their eventual persistence and effects on the use of other travel modes, are still largely unclear. This study aims to answer some of the questions through the analysis of a comprehensive dataset that was collected in fall 2015 from a sample of 2400 residents of California, including 1400 millennials (between 18 and 34) and 1000 members of the previous Generation X (35 to 50) recruited with a quota sampling approach from each of the six geographic regions of California and neighborhood types (urban, suburban, and rural). The survey collected information on individuals’ personal attitudes and preferences, lifestyles, use of information and communication technology (ICT) devices and adoption of online social media, residential location and living arrangements, commuting and other travel patterns, current auto ownership, awareness, adoption and frequency of use of several types of shared mobility services, major life events that happened in the past three years, future aspirations and propensity to purchase and use a private vehicle vs. use other means of travel, and sociodemographic traits. Among others findings, the analysis of the dataset highlights how millennials consistently drive less and use all types of shared mobility included in the study (fleet-based car-sharing, peer-to-peer carsharing, dynamic carpooling, on-demand ride services such as Uber and Lyft, and bike-sharing) more often than older peers, in all regions of California. Among the somewhat concerning results (from the perspective of transportation sustainability, and of the adoption of active lifestyles), a non-trivial amount of young travelers are found to use Uber or Lyft in substitution of walking and biking, or for trips on which they would have otherwise used public transportation. 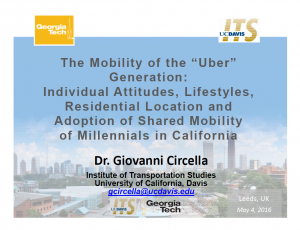 It remains unclear if the millennial generation (Gen Y) reflects a different generation, or simply a young generation which will eventually adopt similar mobility and consumption lifestyle patterns held by Generation X as they age. Economics such as recession, automobile-related costs, advances in and greater adoption of technology, demographics such as delayed marriage, residential location and shift to urban, cultural, regulatory and rise of alternative modes such as Uber, at the aggregate level, suggest processes important to understand peak car and rise of shared economy.  However, research remains based on large travel data sets, and therefore involving making important inferences into whether Gen Y reflects a generation with different expectations, lifestyles and activities.

Findings presented draw from a survey taken in fall 2015 from a sample of 2400 residents of California, 1400 millennials (18-34) and 1000 Generation X (35-50) Data analysis is very embryonic, with weighting and ranking still to be decided.  As such, findings presented are subject to change.  Level of detail of data collected suggests fruitful international collaboration.  For example, similar international work is being conducted in Australia.  A key goal of this California study is to conduct a longitudinal study of the same 2,400 survey sample every few years.

Initial observations suggest similar responses between generation X and Y; for example in perceptions in career development. Differences emerge with importance and dependence placed on ICT and smartphones, between generation X and Y, with further differences based on city and rural, and urban and suburban.  Millennials also appear to multitask during travel at higher rates than Gen X.  The image of a stereotypical young urban worker city with mobile in hand might be accurate to some extent.

There is need to critically reflect on the artificial nature of the generation X and Y categories, such as teasing out important differences between age groups that cut across both generations. This might provide insight into adoption of new norms and skills required to engage in shared forms of mobility such as Uber.  In housing research, researchers focus on the aggregate level, as generational trends do matter; at the end of the day, the sheer population of one generation compared to another can impact housing and transport demand.  There may be subtle country differences (Europe, Australia, US) in how the Millennial image is perceived in the media and by commentators, but again, speculative.

There appears to be some difference between Uber in relation to taxis, and that as such shared mobility forms embed further in the future, success will depend on considering aspects to Uber, such as user information and interface and serving poor public transport regions. Preliminary findings also suggest that Gen Y travelers use Uber/Lyft in substitution of walking and biking, or for trips on which they would have otherwise used public transportation.  This reflects findings documented in a recent journal article on Australian households concerning the value-action gap.  Whereas older populations held less environmental beliefs, their daily household activities were more sustainable (eg: using less water or taking less showers), compared to younger populations, who held more sustainable beliefs, but whose actions were significantly less sustainable.