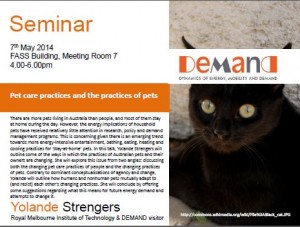 Yolande was originally intending to talk about ‘smart utopias’ but at the last moment changed her topic to pets.  She’d discovered that pets generate significant opportunities and occasions for energy consumption.  The range of pet-related gadgets is impressive: there are ipad games for pets, treadmills for dogs, and special air-conditioned kennels.  More ordinarily, it seems that homes are sometimes warmed and cooled for cats and dogs even when the owners are out.   Cleaning up after pets generates a ‘need’ for hoovering, and as Yolande showed, some owners leave their robot-hoovers running so that their pets can ride around just for fun. The idea of the pet as a family member helps explain what amounts to an extension of human ideas of ‘comfort’ to pets – even though they have somewhat different thermoregulatory systems. From some points of view, pets figure as objects and ‘material elements’ in a host of pet-care practices.  It is also obvious that they  respond and engage with infrastructures: especially of heating and cooling.  So does this mean that pets have ‘practices’ too?  Some said yes: arguing that it made sense to think of pets ‘peforming’ eating, sleeping, walking, pecking open milk bottle tops etc., but others said no – having concerns about how meanings might be shared, and about how pets ‘recognised’ and reproduced different practices.   And from pets we went to plants – noticing the heating ‘needs’ of houseplants, and recalling Tadj Oreszczyn’s discovery that far from saving energy (as passive heating devices) conservatories – in use – are often heated not for people, but for the sake of the plants.  And from plants to mould.  At least some of the energy that is used in buildings is used to keep the mould at bay.  No one thought that mould spores would count as pets, but Yolande’s talk provided a powerful reminder of the energy demands of the non-humans with which we spend our lives.

This entry was posted in Seminars and tagged pet care practices. Bookmark the permalink.