Organised and led by Alan Wiig. 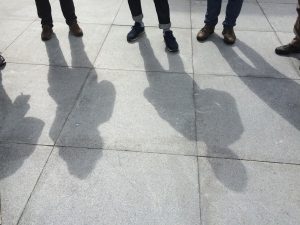 During the 2016 Demand Conference a group of attendees spent an hour exploring the infrastructural landscape of Lancaster University’s campus, documenting the systems underpinning the energy demand of the Conference and of the University more generally. The impetus for the event was as follows:

Investigating energy demand in the landscape is a means of grounding theory in place and everyday practices. This participatory, conversational ‘walkshop’ will explore the geography of energy demand through the material infrastructures of mobility, electricity, and digital connectivity that produce, maintain, and enable patterns of social and economic exchange today.

Participants were encouraged to document the walk and their contributions form a photo essay which can be viewed here and a captioned gallery, accessed below.  (Click on the images to open the gallery and captions)

Robert Smith, of the Department of Social Science, Health and Medicine at King’s College London offered the following thoughts on the event:

I suppose my thoughts are on three themes (that I decided on half way round); Method, Access, and Inertia.

I’m coming from an STS perspective, so Bowker & Star’s Sorting Things Out is the thing that I automatically think of when I start thinking about infrastructure. The first thing that they say in there is now kind of obvious, that ‘good infrastructure is hard to find’. They talk about performing ‘infrastructural inversion’ to make it visible, and I’ve wondered what this looks like in practice.

As we were walking around, I noticed that most of the infrastructure is hidden in a back-stage kind of way but a lot of it is purposefully shielded at a much smaller level. Because it’s central to the functioning of all kinds of practices / structures / systems, and because it’s a technological system itself, it requires maintenance. That means that it needs to be accessible. So there is a potential tension here between infrastructure’s centrality to the functioning of social systems and the consequent desire to control who has access to it versus the need for it to be maintained.

Methodologically, other than just looking for stuff, I noticed that there was some work going on in the spine part of the campus. Consequently, the walkway was covered with a netting. I don’t know whether there was previously boarding to that covered the cables or whether the netting was there to protect the normally exposed cables, but it made me think of construction / renovation as a way that infrastructure can be made visible.

Finally, when we talk about infrastructure (this is part of the paper that Myself and Richard Helliwell presented at the conference) we often think of the obduracy and inertia that it has / builds up. But we need to be careful not to assume that means it’s immobile or stagnant; the fence has obviously moved quite significantly over time.’

Richard’s reflection summarizes the goal of the Walkshop:

To situate energy demand within the everyday geographies of, in this case, Lancaster University and Northwest England, to consider our role as scholars/researchers as well as consumers demanding energy through electricity itself (such as lighting or even charging electric vehicles) but also the myriad systems that also require energy, not least the wireless, digital connectivity both blanketing the campus and constantly in use by conference attendees.