An ethnography of the DEMAND conference

Mikkel Bille, Roskilde University and DEMAND visitor was invited to provide an ethnography of the conference.  Here he takes an irreverent look at “the tribe.” 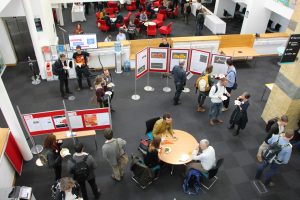 Thanks Gordon for asking me to deliver a mini-ethnography of the conference in about 8 minutes.

About a month ago I met the head of the Danish parliament’s research policy committee, who stated that basically most politicians are afraid of academics because they are always so critical and publicly display the ignorance of the politicians. That statement is the starting point of this presentation.

This anthropology of the DEMAND Conference has the subtitle: Academics: the not so fierce people

I’ll touch on a few of those. I applied a methodology called FFRO: Free fabulation based on random observations. I also make use of the oldest anthropological trick: describing it as a tribal meeting to create analytical distance. But make no mistake: This is a tribe.

The academic island
On a beautiful tropical island, it is time for a festival where the tribal leaders and their prestige objects called PhDs, meet up to discuss the rising water level. There is a distinct and friendly openness towards meeting colleagues, old friends, and new people.

On the island, deep inside the caves, and not present at the festival, however, are also the antagonists: those actually running the island from their dark cave, not yet seemingly affected by the water level. There are several tribe members interacting with the cave men, mostly offering critique but also engineering models for them. Most often the antagonists are presented by the tribes as the people doing everything wrong, leading to the impression among the cave men that the tribes are fierce and aggressive.

Power
But actually the tribal members on this festival are not. At least not when they are together. Unlike many other tribal festivals this festival is on the surface surprisingly egalitarian. There are no keynotes highlighting one tribal leader over the other. Most interaction seems to try to avoid open conflict, even if there are some disagreements. Unlike the fierce people the cavemen see, the tribes in this festival display what I call a culture of empathy. Let me illustrate with the most ritualized and routinized speech act after a presentation: “Thank you for an interesting paper”.

What the person is saying here is obviously that it was an interesting paper. Yet, in the routinized way the appreciation is presented, and judging from the subsequent question, it may also sometimes be a polite way of saying it was not interesting, without saying ‘this is nonsense’ or ‘I strongly disagree’ as they would say to the cave men. By appreciating the ‘interesting paper’ the person asking, is putting himself in the position of the presenter in order not to publicly announce the implied hierarchy of knowing or create too much conflict. Yet no one knows if it is a sincere statement or not. So the ‘Thank you for an interesting paper’ is actually a way of not not saying it was interesting. The double negation allows people to avoid conflict at the festival by putting themselves in the presenters’ place. Through such empathy, a sense of community is upheld in this seemingly egalitarian and caring space. This does not imply that there are not disagreements, or that some presenters may go dry their eyes in secret afterwards. It is only to suggest that there is an element of caring in putting oneself in the presenter’s place by stating it was interesting – sincere or not.

Order
The event allows tribal members to be relieved from their normal chores called “teaching”. Opposite teaching – which is all about finding new ways of being silent – a festival presentation is about new ways of putting more words into a small amount of time, leading an unaware bystander like myself to the idea that sometimes perhaps the point of presenting is not comprehension but participation. Younger members are especially prone to this exercise.

There are also the so-called “power point slides” – a magical technology that the presenters and audience stare at and read from, as if they offer truth serum – often used on the premise that ‘if you can’t make a point, make a power point’. Regardless of the amount of words or slides, there is a strict sense of order enforced at the festival through the agency of dragons, bells and paper signs, and a pronounced will to conform to orders among the participants. Rarely did we see people going far beyond schedule. Such conformity is perhaps associated with their cosmology.

Cosmology
More than empathy as a tool of mitigating conflict, what holds this festival together is their cosmology. There are actually signs of several different cosmologies present. Both ANT, STS and a bit of positivism were found. But by far most dominating is the cosmology called Practice-theory, evidenced by only the word “Energy” being more prominent in the title and abstracts than the word “practice” then followed by “Demand”.

It is a cosmology fairly recognisable to a Christian audience. There is a trinity of knowledge (God), the materials (Jesus), and the immaterial meanings (the Holy Spirit). As we all know, what the tribal healers wrote or intended back in the days is not necessarily the way it is performed by tribe members. Yet, we also know that the point of cosmologies is to confirm social coherence. By invoking small parts of the scriptures, one can talk without actually having to explain or necessarily know precisely what is meant, and through such acts get nods of approval, while trying not to ostracising alternative cosmologies too much through the above acts of empathy. It should likewise be noted that unwritten laws helps mitigating conflict by upholding taboos such as not mentioning “Agency”, “political structures”, or  “affect” which is ‘the male species way of talking about emotions’. But in all the certainty of the cosmological order, the question increasingly lingers as private secrets among the tribe members: How much can we be allowed to change the cosmology, when and how?

Us and them
Finally, the roots of the impression of the fierce people is the taken-for-granted confirmation that takes place in the interaction between presenter and crowd about the common yet ill-defined antagonist in the cave. So if someone says ‘by understanding this through human needs and choices, the economist…’ the word economist apparently automatically makes the audience go HA; or as seen from the laughs that came from a definition of ‘future studies as MBA’s trying to do sociology with rational choice theory’. A funny statement for those who are part of the tribe. The care and empathy displayed towards the tribal members is thus markedly opposed to the fierce statements about the antagonists in the cave.

The currency for politicians is power, for the market it is money, for consultancies it is action, and for the tribal members it is knowledge. Don’t measure one by the currency of the other. That also includes not measuring knowledge in the currency of the market. Lurking in the background of some discussions I found an awareness that this us and them discourse offers a challenge of whether to learn to speak the language power understands, or doing something radically different allowing the cave men to open their eyes to the power of practice (risking the counter-effect of ignoring the tribal members for their absurd focus). The tribal members have great hopes for the future of their cosmologies, in all their variations, and also hopes for the world, if looked through their cosmology. But they also seem to know that they now need to either enter the cave, or lure the cavemen out, to make the cavemen and everyone else understand “what energy is for”.