Smarter and more transparent than you: Technicians and users scripting the user’s role in smart grid experiments. Catherine Grandclément 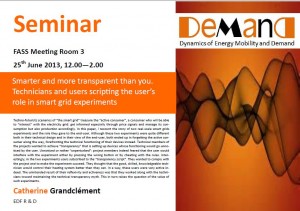 Techno-futurists scenarios of “the smart grid” treasure the “active consumer”, a consumer who will be able to “interact” with the electricity grid: get informed especially through price signals and manage its consumption but also production accordingly. In this paper, I recount the story of two real-scale smart grids experiments and the role they gave to the end-user. Although these two experiments were quite different both in their technical design and in their view of the end-user, both ended up in forgetting the active consumer along the way, forefronting the technical functioning of their devices instead. Technical members of the projects wanted to achieve “transparency” that is setting up devices whose functioning would go unnoticed by the user. Unnoticed or rather “unperturbed”: project members indeed feared that the user would interfere with the experiment either by pressing the wrong button or by cheating with the rules. Interestingly, in the two experiments users subscribed to the “transparency script”. They wanted to comply with the project and to make the experiment succeed. They thought that the good, skilled, knowledgeable technician would control their heating system better than they can. In a way, these users were very active in-deed. The unintended result of their reflexivity and activeness was that they worked along with the technicians toward maintaining the technical transparency myth. This in turn raises the question of the value of such experiments.

This entry was posted in Seminars and tagged seminars, visitors. Bookmark the permalink.