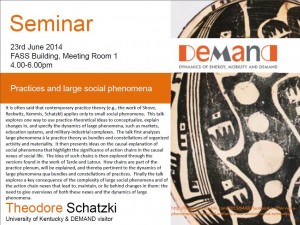 In brief, Ted’s argument was this:  there is a tendency to equate a focus on social practices with a focus on the small scale, and with fine grained ethnographic research.   In contrast Ted argued that there is no reason why theories of practice should not provide compelling and persuasive accounts of ‘large’ scale social phenomena – including markets, forms of governance, and big trends in social arrangements.   Equally, the ‘large’ can be studied and analysed without resorting to a terminology of ‘higher levels’ or of macro as distinct from micro phenomena.  In explaining how this goes Ted made much of the multiple ways in which practices and arrangements link to each other: he talked of bundles, and of chains, series and cascades of action.  He discussed processes of imitation and mediation, and considered loops of feedback as well as blockages, breakages and circuits of reproduction.  One core idea is that ‘large’ and ‘small’ phenomena are not essentially different: they hang together in much the same way. Another has to do with methods of ‘overviewing’ – that is characterising, narrating and representing ‘large’ social phenomnena – again as distinct from methods of abstracting seemingly macro-level factors.  When asked about how to do overviewing, as a research method, Ted’s answer was simple: “First identify your bundles”.

It is often said that contemporary practice theory (e.g., the work of Shove, Reckwitz, Kemmis, Schatzki) applies only to small social phenomena.  This talk explores one way to use practice-theoretical ideas to conceptualize, explain changes in, and specify the dynamics of large phenomena such as markets, education systems, and military-industrial complexes.  The talk first analyzes large phenomena à la practice theory as bundles and constellations of organized activity and materiality.  It then presents ideas on the causal explanation of social phenomena that highlight the significance of action chains in the causal nexus of social life.  The idea of such chains is then explored through the versions found in the work of Gabriel Tarde and Bruno Latour.  Following this, I explain how chains are part of the practice plenum and thereby pertinent to the dynamics of large phenomena qua bundles and constellations of practices.  The final section of the talk explores a key consequence of the complexity of large social phenomena and of the action chain nexes that lead to, maintain, or lie behind changes in them: the need to give overviews of both these nexes and the dynamics of large phenomena.  Concepts that are useful for this task are presented.