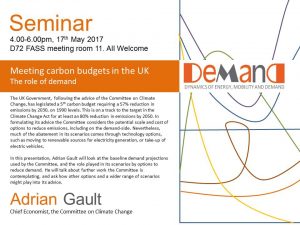 This seminar took place at Lancaster University on 17th May 2017

Meeting carbon budgets in the UK – the role of demand

The UK Government, following the advice of the Committee on Climate Change, has legislated a 5th carbon budget requiring a 57% reduction in emissions by 2030, on 1990 levels. This is on a track to the target in the Climate Change Act for at least an 80% reduction in emissions by 2050. In formulating its advice the Committee considers the potential scale and cost of options to reduce emissions, including on the demand-side. Nevertheless, much of the abatement in its scenarios comes through technology options, such as moving to renewable sources for electricity generation, or take-up of electric vehicles.

In this presentation, Adrian Gault will look at the baseline demand projections used by the Committee, and the role played in its scenarios by options to reduce demand. He will talk about further work the Committee is contemplating, and ask how other options and a wider range of scenarios might play into its advice.

Adrian joined the secretariat of the Committee on Climate Change in May 2009, where he is responsible for analytical work looking at UK greenhouse gas emission reduction potential and costs. Based on the Committee’s advice, in July last year the Government legislated a 5th carbon budget requiring a 57% reduction in UK emissions in 2030 as against 1990 levels. Recently, the Committee has published a report looking at the implications of low-carbon measures for energy prices and bills. It is now taking forward work on measures required to meet the gap to the UK’s legislated fourth and fifth carbon budgets. Prior to joining the CCC secretariat, Adrian has substantial experience of energy and environmental issues – as an economist in Department for Transport, the Energy Group at DTI and in the Treasury tax team.