The DEMAND Centre’s Summer School on ‘Energy in the City’ took place at the Institute for Transport Studies at the Leeds of University from the 18-20 July 2017. Here is an overview of the most important ingredients of the event.

The Talks
Presentations from a range of DEMAND speakers and invited guests are one of key ingredients of the Summer School. They are strategically interspersed between workshop elements, to help prepare for and consolidate them. This year we were lucky to be joined by Tom Knowland, Head of Sustainable Energy & Climate Change at Leeds City Council, who talked about the climate change and energy-related work taking place in Leeds. We were also joined by Rachael Unsworth, something of an expert on the history of the city, an activist on local sustainability and a geography researcher, who helped inspire and frame the fieldwork exercise with her local knowledge. 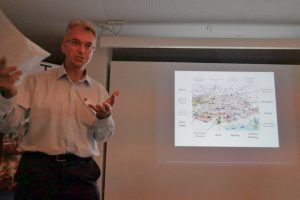 We were also joined by special guests from the University of Leeds. John Barrett, from fellow EUED Centre for Industrial Energy, Materials and Products (CIE-MAP), widened the focus beyond the energy directly consumed in mobility or buildings to all the other products and services that households consume and incur energy demand internationally. Eleonora Morganti, from the Institute for Transport Studies, drew attention to the global chains of logistics that underpin food consumption and the problems of proliferation and multiplication in delivery at the ‘last mile’. 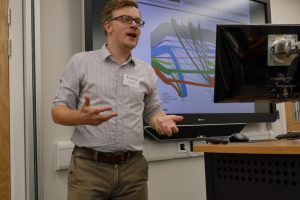 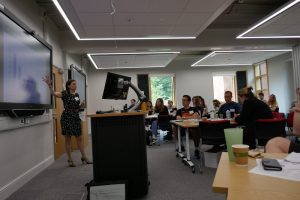 DEMAND speakers included Matt Watson and Elizabeth Shove who both, but in different ways, talked about how infrastructures and practices intersect and interact over time, and the questions this raises for studying energy demand, particularly in urban spaces. This sparked a discussion about what makes ‘the city’ so distinctive, if at all, as a site for researching energy and energy demand.

After the fieldwork Ian Jones and Noel Cass talked about their work on online shopping and the future of offices, respectively, which helped to exemplify approaches that provide insights into energy demand in urban (and other built) areas, and how that is changing. 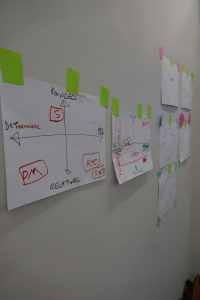 This workshop took place on the first day and helped to kick off discussions for the rest of the Summer School. It is based on four readings sent out in advance and this year had a number of stages. Firstly, groups discussed the readings and positioned the four in relation to various dimensions, with a challenge for group members to also position their own research on the same axes. 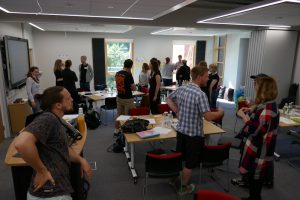 Comments, questions and suggestions were then individually written on post-it notes to each of the papers. And suggestions for further reading on Energy in the City were collected. Finally, standing in the space formed by the four readings (‘attached’ to the walls), attendees were challenged to locate their current research, and chat to others nearby about why they selected that position.  This tangibly allows everyone to position themselves in respect to other research.

The Methods Carousel
This ingredient is a preparatory step before the fieldwork and facilitates methodological reflections and insights from attendees own research. Everyone rotated to three tables, in a sequence they selected themselves, to discuss with hosts three methodological challenges in studying energy demand. Elizabeth Shove and Matt Watson, hosted a discussion about how to connect and study infrastructures and practices (building on their talks from the previous day); Ian Jones and Greg Marsden discussed the challenges of how to define ‘shopping’ (previewing Ian’s talk the following day) and Torik Holmes and Janine Morley discussed how maps can be used in studying energy demand, drawing on some of Torik’s work in Manchester.

The Fieldwork
This is, without doubt, the key ‘workshop’ activity of the whole Summer School. The idea is for groups to go out and directly observe something about energy demand in an unfamiliar environment. This year, with the theme of ‘Energy in the City’, it was fantastic to be based in Leeds. Groups were allocated particular, bounded areas, to investigate, and armed with a set of open questions about how the land is used, what happens in that area, and how that varies and has changed, what infrastructures that depends on and what opportunities there may be to reduce energy demand.  Groups only have a few hours to get out and make some observations and notes, before completing a poster about their findings. 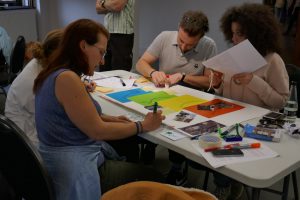 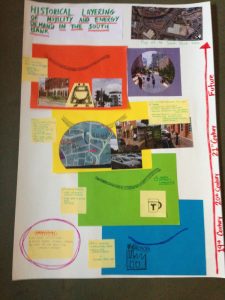 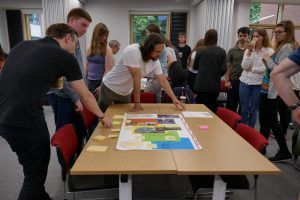 This year, posters were used as a basis for developing a research proposal. First, everybody viewed the posters and voted for best design and clearest ideas, and added comments to them. Then people were asked to select one that interests them; this became their ‘adopted’ poster. In new groups formed around these posters, there was chance to discuss the ‘adopted’ poster amongst themselves and with some of the originators, who visited the ‘adopted’ teams to explain a few points, before returning to their own ‘adopted’ group. Discussions and posters were then used to develop ideas for a small research project for Tom Knowland at Leeds City Council. These were pitched in 3 minute presentations and Tom decided which he would prefer to ‘commission’. 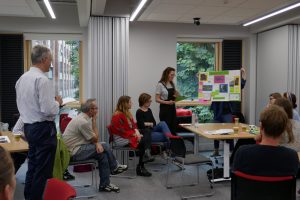 On the previous night, we had heard from Tom about his work at the City Council, and this was a great way to bring out some of the practical implications from the fieldwork and to continue the conversation with Tom, particularly on what it might look like for the City Council to consider more work on energy demand. There were some great ideas: ranging from investigating the role of car parking within employee incentive schemes run by large organisations, and the role of the City Council in this; to building a database of shopper activities and movements within retail areas of the city, which could help find ways to maximise multiple activities in a single trip; to how professional clothing and park maintenance might intersect, for example in the provision of flexible outdoor workspaces that combine with ways of encouraging a wider range of ‘professional’ clothing.

Making connections and having fun
One of the main benefits of the Summer School is networking. Not only do attendees get the chance to meet and work alongside DEMAND researchers and guests, they also meet and learn about each other. Several ingredients are added to the mix to facilitate this:

Floorball – the much-loved DEMAND speciality. In the words of one attendee: “When will floorball take over the world?” 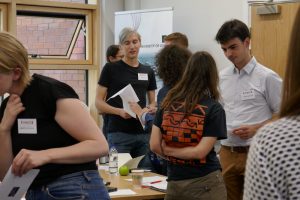 Introductions  – On the first day, after Greg introduced the DEMAND Centre and its distinctive approach, it was over to the group to introduce themselves. This year, everyone was asked to bring a postcard from a ’home’ city with a picture and a few words relating to energy demand in that city that is in some way connected to their work. These were used as people moved around the room to meet each other (and re-find their own postcard, after they had all been mixed up). Once all postcards were reunited with senders, we positioned ourselves in a circle to show the geographical relation to Leeds, East or West, of where the postcards were from. Then, new groups gathered in corners of the room relating to a theme that their postcard most spoke to: meeting and introducing themselves to who-ever else was in that space.

Evenings – Of course, the evenings were also for socialising. There was a barbeque on the first night (and it didn’t rain!) and a proper meal at the Tetley on the second night (when, contrary to all forecasts, it also didn’t rain. Except on those who lingered on their way home!). 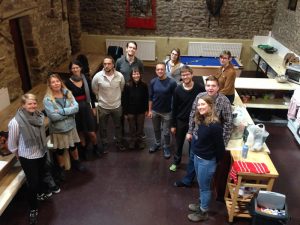 Overnight trip – To extend the conversations, a smaller group braved the mobility challenges of relocating out of the city to the countryside, for the optional overnight trip. In past years, we have been camping. This year we went to a bunkbarn near Bolton Abbey. This was a lovely base for a walk down to the Abbey and its famous stepping stones: new site of the DEMAND spelling competition. And some now classic DEMAND recipes were also added to the mix: Greg’s pea soup, Matt’s warm lemony quinoa salad and Eton mess.

The Attendees – Finally, the ingredient that makes it all work together is a great set of attendees who brought a fantastic range of ideas and expertise and admirably worked with everything that was thrown at them. 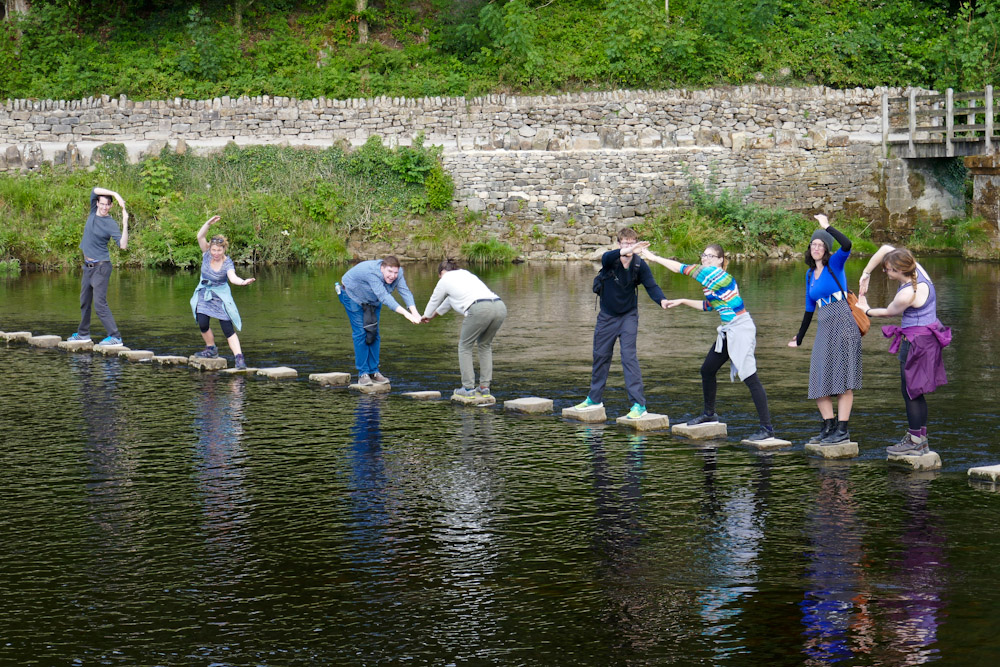